GOBLIN COURT:  The whole village was consumed with curiosity about the newcomer Robert Challenger, who had moved into the Manor, and Lucy Wild was just as interested as the rest of them. But she become more than a little disturbed when she discovered the truth about him....
Story Summary

Jared expected to spend his last semester of high school in the small town of Abingdon, Virginia, hanging out with his best friend and preparing for college.  Then Jensen Ackles moved into Abingdon’s most well-known deserted mansion and showed up at his workplace asking for Jared by name.  Jared’s initial curiosity spun quickly into disbelief when Jensen explained the truth.

Read it on AO3 here

Prompt:34. Lucky Charm
Long ago, as revenge on a Corwin who stole her son's fiancee, a witch proclaimed an eternal curse that every Corwin male who married for love would be destined to lose his woman and his fortune...Derek thought he could outsmart the long-standing Corwin curse by breaking up with Gabrielle, his first love – and marrying someone else. Now, divorced and broke, all he has left is his teenage daughter and a healthy respect for ancient sorcery. But then Gabrielle returns, determined to defeat the curse and rekindle their passion. But will her stubborn streak and her unwavering love be the lucky charm Derek so desperately needs?


Summary: Decades ago Henry Winchester stuck his nose where it didn't belong and as a result his bloodline was cursed to lose what they loved the most. The curse passed down through the generations like poison until the men are cold, empty shells.
Sam thought he could outsmart the curse by running to Stanford and settling down with Jess, leaving behind a life of hunting and a brother he loves more than he should. Now, widowed and desperate, he has nothing left but his son Jack and resentment for how his life turned out.
It's been 20yrs since Sam's seen his brother but the night Dean breaks in and demands his company on a hunt for the witch that cursed their family, the passion between them is still there, just as strong and terrifying. This Dean is much different from the one Sam had left behind, older, wiser and hardened by a life of hunting alone and living without his heart.
Will dumb Winchester luck be enough to break the curse and finally get their happy ending?

smalltrolven
Pairing: Sam/Dean
Rating: NC-17
Word Count:4,977
Warnings: None, except for tooth-rotting amounts of fluff.
Prompt: #34: Lucky Charm.
Long ago, as revenge on a Corwin who stole her son's fiancee, a witch proclaimed an eternal curse that every Corwin male who married for love would be destined to lose his woman and his fortune...Derek thought he could outsmart the long-standing Corwin curse by breaking up with Gabrielle, his first love – and marrying someone else. Now, divorced and broke, all he has left is his teenage daughter and a healthy respect for ancient sorcery. But then Gabrielle returns, determined to defeat the curse and rekindle their passion. But will her stubborn streak and her unwavering love be the lucky charm Derek so desperately needs?

Summary It’s an eternal curse, born of revenge that the Winchester family has always had to bear. It’s love lost and an even greater love found.

Read it on LJ here or over on AO3 here.

“Sara had run away from Alex Stevenson's demands of unquestioning love, but her amnesia made her forget her year away from him. Until she saw the woman who had caused the break up of their marriage. Then shatteringly, everything fell back into place and she saw the caring and protestations of love were all part of the plan to make her stop their divorce. Her parents were in on that, too, constantly trying to bring them together. All of them treated her like a child – they didn't seem to realise that the pain and hurt of the past year had made her grow up into a confident woman, sure of what she wanted. But was she so sure of not wanting Alex?”

Summary: Sam wakes up in Kermit, Texas on Amelia’s front porch. He’s badly beaten and bleeding, with a whole month worth of memories just gone. He finally recalls writing a horrible note for Dean after a fight they’d had on a hunt. Does Sam even have a home to go back to?

Read it here on LJ or over on AO3.

siriala
Pairing: Jensen/Jared
Rating: NC-17
Word Count: WIP
Warnings: kink, dubious consent in previous relationship, body modification
Prompt: 8 Along Came Trouble : Sheriff Tucker Spencer has seen some action... but finding an almost-naked woman asleep in his bed leaves him speechless. Especially because this same woman, Mary Elizabeth, broke Tucker's heart six years ago by marrying a charismatic Virginia politician, a man who's just been found shot dead. Mary Elizabeth needs Tucker's help. Needs him, period. But along with her return comes all the town gossip about their reunion romance. Even his father, who can't manage his own love life, is determined to "impart his wisdom" regarding theirs. Tucker's not listening to any of it. He just needs to clear Mary Elizabeth's name. But in the end, he'll confront a mystery even more confusing than murder: how the heart makes room for forgiveness and a new start.

Summary: Five years after marrying another man, Jared was back, asking for Jensen's help in exonerating him for the murder of his husband. Should the sheriff forgive the past and help the man he could never forget ? Or should he just abandon him, like Jared did, to try and avoid more suffering ?

Read it on AO3

( You are about to view content that may only be appropriate for adults. )

spn_meanttobe’s 2020 challenge and inspired by the following prompt:
( Collapse )

Story title, chapter titles and prefaces are from Fast Car, by Tracy Chapman

Summary: When their alpha-male -sire dies of liver failure, Dean announces that he wants to use the money from John Winchester’s estate to buy a bed-and-breakfast in the small fishing village of Jean-Lafitte, Louisiana. After everything his omega-brother has done for him, alpha-male Sam can’t say no.  Despite privately thinking it’s a bad idea, Sam agrees to move interstate with Dean and Dean’s four-year-old omega-daughter, Millie, to help run the B&B, in between his classes at UNO.
When they get to town and find out that the supposed Bed-and-Breakfast is actually a Bait and BBQ attached to a run-down house, Sam’s sure he’s going to be proved right.
He didn’t count on Dean’s stubborn determination or on his brother’s slowly growing romance with alpha-male Benny Lafitte; local fisherman, short order cook, and descendent of the town’s namesake—the infamous 19th century pirate, Jean Lafitte.  When Millie’s alpha-male-sire turns up unexpectedly and tries to claim both Dean and his daughter, Dean is determined to keep his family safe. Can Dean earn the happily ever after he deserves—or will it all blow away like dust in the wind?

Title: All or Nothing
Artist: smut_slut
Pairing: Jared/Jensen
Rating: Teen and up, some skin but no bits showing
Warnings: none

Prompt: 30. Lake of Silver
Roland Pagel was a dynamic man who always got what he wanted. And it appeared he wanted Clarissa – which suited her very well. But the glamorous Simone was still very much on the scene. How dared Roland resent Clarissa's friendships with other men when he made no secret of the fact that he had not given up other women?

Summary Jensen Ackles is a typical wealthy, take-charge Texan male, at the top of the food chain and used to getting what he wants whenever he wants it. What he happens to want more than anything is for Jared to be his – which would work just fine for Jared, except that Jensen isn't exactly single.
News of Jensen's engagement to the lovely socialite Danneel Harris is soon to hit the papers so its not like Jensen has any right to resent Jared's newfound friendship with a certain Mr. Amell.
Jared loves Jensen but he won't play second fiddle to anyone and he won't wait around forever. If Jensen wants him he'd better give it all or nothing.

amberdreams
Pairing: J2
Rating: R
Warnings: Topless boys, suggestive pose = NSFW (unless you're working from home!)
Prompt: The Texas Ranger - ART
When Texas Ranger Marc Brannon returns to the line of duty, a high-profile murder mystery pits him against the vibrant and vulnerable junior investigator from his past. Years ago, Josette Langley made no secret of the fact that she was desperately in love with the rugged lawman, and despite their differences, the roughhewn loner became drawn to the innocent young woman. Yet Marc and Josette parted on explosive terms when she made a shocking accusation that shattered both their lives. Now they are back together again....And this time a lot more is at stake than just their hearts. For the woman Marc cherished is being targeted by a corrupt political figure who will stop at nothing to bury the truth. Can Marc and Josette set aside their stormy discord and see justice served? Or will they both be caught in the cross fire...?

Click on the teaser for the art on LJ 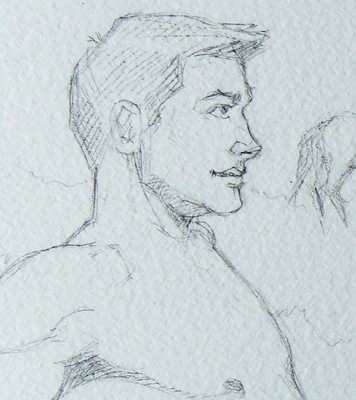 Title: Two Sizes Too Small
Author: amypond45
Artist: casey679
Pairing: J2, past Jensen/Matt Cohen (mentioned)
Rating: PG
Word Count: 4K
Warnings: none
Prompt: To Sarah, the Manor was her beloved home and she hoped it always would be, but unfortunately the Rostyns had fallen on bad days. Otherwise they would never have had to sell the reputed Reynolds portrait and then Thorold Kerr might never have heard of Thorne Manor. But Thor came and bought the portrait and later, attracted by Sarah, bought a small property in Penfold. Sarah, however, resented him and regarded him only as an interloper. Soon after, the death of her father revealed the true extent of her troubles and made the sale of the Manor necessary. There was only one bid – from Thorold – and it had to be accepted.

Summary: Ever since his mother died when he was a teenager, Jensen has kept himself on emotional lockdown. Now his father has passed away too and Jensen finds himself back in his hometown, cleaning out the family home and getting it ready to sell. If only his gorgeous next door neighbor would leave him alone.

Fic Links: READ ON A03 | READ ON LJ
Collapse